In 2003 we were following the floor of a Mesolithic clay platform and discovered our first feather pit. At the time we thought the cut was made as a result of someone digging a hole to plant a tree. We were soon 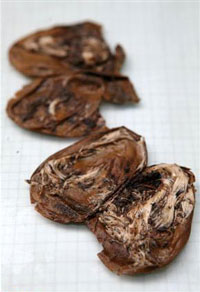 to find it was something very different indeed! The pits that were cutting the clay platform were rectangular and either north south or east west aligned. They were approximately 42cm long by 35cm wide and 17 cm deep. When we excavated the first one we were surprised to find white feathers in it and thought it might have been perhaps a bird plucking pit, which was a common farming practice at the turn of the century. This turned out not to be the case when we found that the feathers were not plucked, but had been laid skin side out with white feathers inside. We took samples of the feathers to the bird expert at the local zoo and found them to be swan feathers. My immediate thoughts then were the burial of a child in Denmark in the Mesolithic at a site called Vedbaek. That child was  laid on a swans wing and thinking that as we were following the Mesolithic platform there might have some connection. But even though we did not have a radio carbon date for any of the feathers at the time, we knew they must be much later as they were cut through that feature.

In the pit laid on what we found to be the swan pelt was a pile of tiny stones too surrounded by some sort of organic matter. Some suggested at the time that this was the stones from the crop of the swan, but they were not mixed with the organic matter they were actually wrapped in it. Suggesting that the stones had been wrapped in leaves and placed in the pit purposely. Added to the stones were bird claws from different types of birds too.

We knew the stones were not from our geology as soon as we found some tiny flint nodules in them. Flint is only found in the coastal 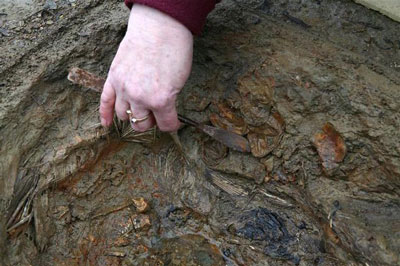 regions in Cornwall, so we knew the stones were imported. An article was put on the Discovery Channel website not long after this and someone mailed us and suggested the stones might have come from Swan Pool which was fifteen miles down river from the site. So an expedition was mounted to Swan Pool and low and behold the stones around the lake were identical to the ones we found in the pits. We had a local geologist friend of ours to confirm this, so then we had a link with Swan Pool and our site at Saveock. We excavated 8 pits that season and found that only two of them were intact the other 6 had had their contents removed in antiquity leaving just a few feathers and stones to show what their previous fill was.

We continued to find more pits but most with their contents removed till 2005 when we excavated a line of three pits. Two rectangular and a round one between them. We excavated the round one and were amazed at its contents. It had the same swan feather 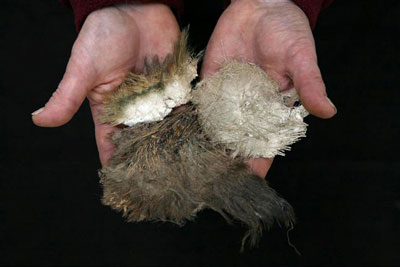 lining and on either side were the bodies of two Magpies and between them were over 55 eggs. The shells had dissolved, but the membranes were intact due to the constant spring line flowing from the peat below the clay platform. When we looked at them closely they were a mixture of eggs from different birds from bantam size to duck egg size. The most intriguing discovery was when we looked at the egg membranes more closely and found 7 of the eggs had fully formed chicks in them ready to hatch! It was suggested by someone when we found the eggs in the pit that it was some obscure sort of egg preserving pit! But who would preserved eggs by first killing a swan and skinning it to line the pit with, then killing two magpies (People in Cornwall are still very superstitious about harming Magpies today) and then put in over 55 different sized eggs in it with some  chicks trying to chip their way out of them at the time!

I have spent most of my career in archaeology disproving the ritual tag that some archaeologists put on things they don’t understand. So it is ironic that I should be directing such a site that was so obviously the result of pagan rituals of some sort!

In 2003 we asked the witchcraft museum in Boscastle if they knew about such pits in the county and while they were very interested they had never heard of such a thing. I have be 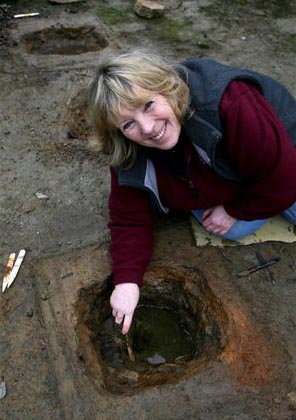 en to 3 international conferences and still no one has heard of them. So whoever was depositing the swan feathers in the pits they were very, very secretive. Five years later we now have excavated 35 pits and have the tops of many more appearing.

The only valid suggestion we found was that the pits were some sort of offering to St. Bridget or St. Bride the patron saint of brides who has the swan as her symbol. It is said that offerings to her were placed at the branches of three rivers and this area telephone exchange used to be called Threewaters Saveock water, Blackwater and Chacewater.

My own theory (and it is only a theory) is that maybe if you got married and did not get pregnant in the first year, you might make an offering to St. Bride of a feather pit. If you finally got pregnant you had to go back to the pit and take out the contents and burn them and set the spirit of the swan free. If you never got pregnant then the pit remained untouched.

It is just an idea, but the only one we have at the moment. We finally got a radio carbon date for one of the pits which was around 1640’s AD. That was the time of the Civil War and a dangerous thing to be doing when Cromwell’s army came to Cornwall as any sort of pagan worship was classed as witchcraft and punishable by death.