In a stony area to the north no more than fifteen feet away from the first pit excavated a round cut was revealed approximately six feet diameter. At the top of this cut ceramics 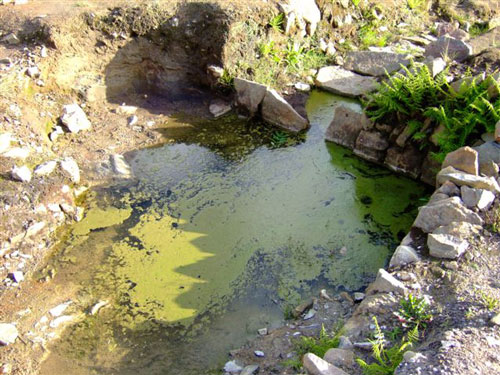 dating to the mid 18th century were found indicating that the feature had possibly been filled in during this period. As we removed the fill of this feature we came across a fine sparkly blue silt 30cm down. This silt we discovered after consulting a geologist was not part of the local geology and had been imported to the site. The geological consultant after analyzing the blue sparkly silt revealed that it was composed of iron pyrites fragments (fools gold) and mineral rich (copper  mainly) subterranean silts.  As we excavated deeper into this damp silt fill springs from the peat below started to fill it. Before long we found fragments of textile and some leather shoe parts in the silt. So we decided to wet sieve 100% of the cut contents as the excavation conditions were too waterlogged to excavate it normally. The wet sieving revealed a wealth of depositions in this cut indicating it had been a votive pool of some sort.

After stabilizing the textiles we found in the pool we had perfect preservation of not just the fabric of the textiles but also their original colours. It has been suggested that the mineral properties of the blue silt might have had something to do with this and of course the constant damp condition of the silt 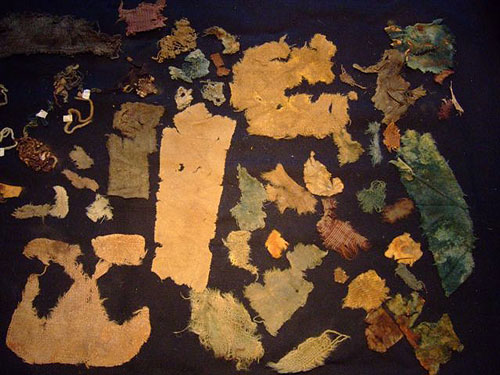 The textile assemblage comprised of over 128 pieces of fabric each of which were different either in weave or thickness or colour. The majority were plain tabby weaves numbering sixty six pieces in all but there was a considerable amount of variation in thickness and quality of the weaving. For the most part the fragments were rectangular strips approximately 5cm x 2cm. However, there were exceptions to this as some of the pieces were clearly strips of selvedge’s or hemmed fabric and in one case a whole pocket front was deposited that was 15cm wide by 17cm long. The colours in the plain weave were as follows, sea green/blue, dark blue, green, rich red brown, orange/brown, brown, pale brown, mid brown, dark brown, mushroom and black. On one piece it was clear that the fabric was faded due to use rather than from the deposition. This fabric had at its edge a seam that had been unpicked before deposition. The fabric that had previously been in the seam was a dark blue thick fabric, whereas the part that was faded was considerably thinner and had faded to a sea green colour. Another piece was part of a seam in a mid brown fine tabby weave that showed two rows of neat stitches on it in a darker brown thread.

The twill weave fabrics were just as varied in their manufacture and colour but were more or less the same size strips as the plain weave with a few exceptions. One was a piece of rich brown loose weave twill that had a knot tied in it. It is inconceivable that such a knot was part of the garments design so it is assumed that the strip was purposefully knotted prior to deposition. The colours were similar to the plain weave fabrics with the addition of seven pieces that were a yellow ochre colour. Five pieces of high status silk and wool mix  fabrics were found in the pool too. This could indicate that  the depositor had married well but still believed in what she had been brought up to believe in. This is of course pure conjecture but valid I feel as the silk fabrics are very noticeable by comparison to some of the course weave deposits. Only three very small pieces of felt were found in the pool, but a considerable amount of yarn that had been knotted together in a variety of colours.

Lastly there was twelve pieces of knitting from very fine knits possibly  from gloves to thick plain knit pieces with purl trims on their hems. A number of the knitted pieces had also been darned using different coloured threads indicating that the depositor was not at all well-off. 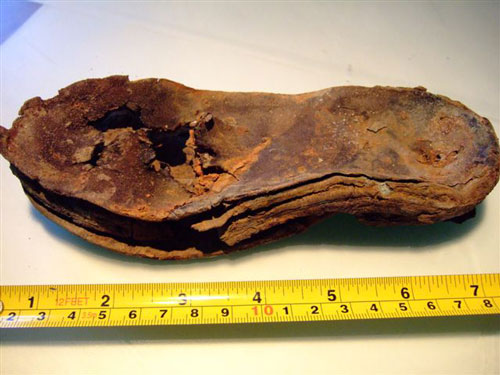 Over forty eight leather shoe parts were also deposited in the pool and four were clearly the straps of sandals with one or two holes at the end that some sort of shoe lace had been previously threaded. There were parts of the tops of shoes with the stitching marks showing and a considerable amount of leather heel and sole parts. One shoe however had the leather sole intact Figure 3. It was 19cm long and 7cm wide at the ball of the foot and 6cm wide at the heel. The sole was comprised of five layers of thick leather and had a fine leather insole. The top of the shoe was missing and it is assumed that it was from either a very small woman’s foot or a child’s. There are references to the symbolism of the shoe in pagan mythologies which are associated with female sexual parts as Leach states,

‘During all ages and in the folklore of all races, shoes have been a symbol of the female genitals’

Maybe this could indicate that the shoe parts were deposited to increase the fertility of the female depositor.

There was a considerable amount of heather twigs in the pool, a plant still sold today in Cornwall for good luck by gypsies. Added to this there were a few worked wood items, a wooden button 3cm diameter, a worn wooden shoe heel and a piece of a wooden tankard lid. A number of fruit stones had been deposited in the silt mainly Hawthorn Stones, Wild Cherry stones and Hazel nut shells These fruit stones and shells  had been carbonized indicating they were not  intrusive from the local shrubbery.

Six delicate pins were found in the silt deposits all with separate soldered heads Figure 4 and all different from each other. 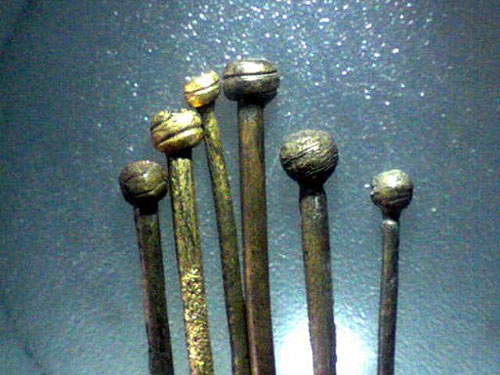 One of the pins had a simple double wrapped gold head on a brass pin whilst the others were all brass pins Figure 5. In Cornwall there is a tradition of bending a straight pin and throwing it into a pool or holy well to make a wish. These pins however were not bent indicating they might have been used as pins when they were deposited. 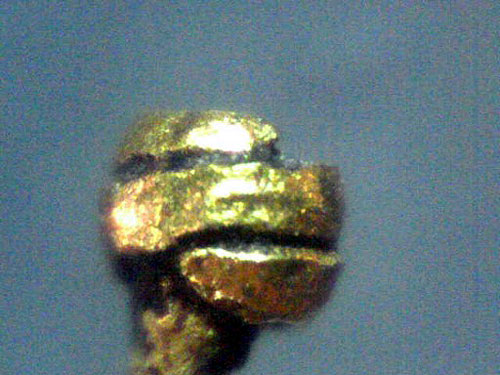 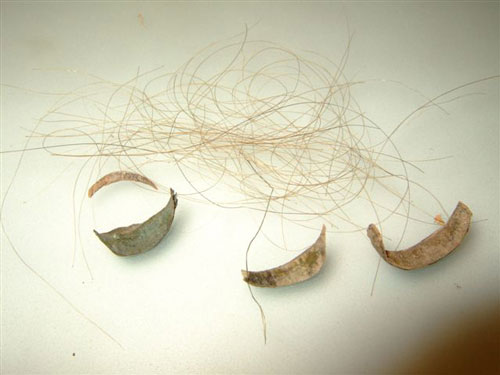 ‘Pins were used in numerous charms formerly both good and evil, and also divinations. Being at once sharp-pointed and made of metal, they could be dangerous or protective according to the circumstances and the manner in which they were used.’

The last item deposited in the pool was part of a broad based iron cauldron which is so stereotyped a part of a witches working equipment we were quite frankly amazed that we found it in the pool too. Fig 7 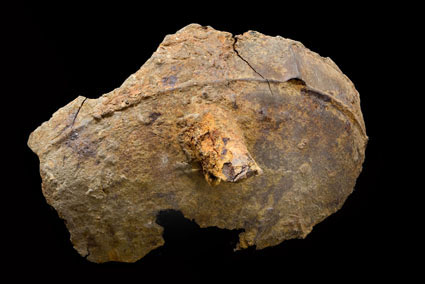